I have been working on my kiddo's room lately. He's almost four and my baby. When we moved in two years ago his walls were already a nice gray color, and I haven't really touched it creatively except to hang bright green curtains. But then I started querying and planning a camp for twenty seven teenage girls and their leaders and my brain needed some creative escape, so guess what Ike, you've received a free room makeover!

I decided to go space theme, mostly because he's obsessed with both Darth Vader and Buzz Lightyear, and because we're raising our children to be nerds. His walls were already a nice gray, so instead of repainting everything, I decided to just paint a gazillion white stars through out his room. It's a subtle way to say kids room, that I hope will grow with him for a while.  There are a few constellations hidden, but generally speaking I just put them up randomly. I also added a comet.

Here's the rocket ship I painted. I wish I had made it a little bigger, I free handed it and it ended up slightly smaller than I was hoping for. It's still the star of the room, it's just a tad too small perspective wise. But oh well. Space is big, and I think it turned out really cute.

Opposite the rocket wall, I hung up some of the art I already had in his room, but instead of it being spread out I put it all together for greater impact. I love the pop of color against the gray, and if you don't believe a turtle belongs in space, then you haven't read enough Terry Pratchett. :)

The "I Like Ike" licence plate used to be attached to my husband's grandfather's car, back when Eisenhower was running for President. We call my son Ike, though that's not technically his name, and I love it here on his wall. It also add to the retro feel by adds a touch more space age. The yellow painting is a quote from Mark Twain, "Kindness is the language the deaf can hear and the blind can see," and the cross stitch has a quote from my mom, "Just because you can doesn't mean you should." They were handmade by my Sister-in-law Courtney and my Mom, respectively. No they don't have anything to do with space, but if you've met my son you'd realize why he needs those quotes on the wall.

Below the painting is a little lost astronaut.

Here's a close up.

Ike has almost finished Potty Training (GLORY HALLELUJAH!) and when he does, we're going to move him to a big boy bed, and give him this bedding set. 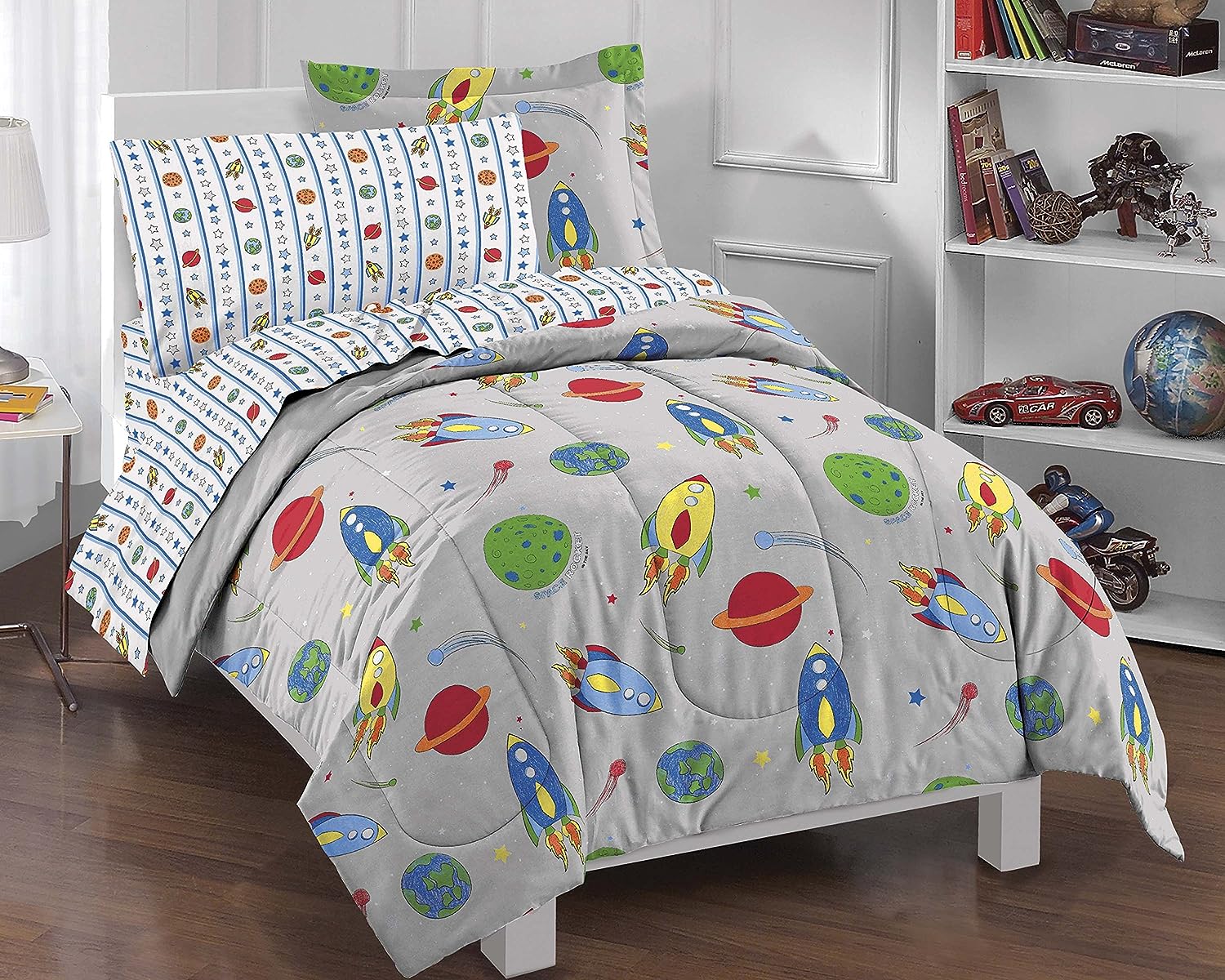 I love the pop of color on gray, and the rockets and planets look hand drawn, so I think it'll be perfect. And the price is right. It's on Amazon and overstock at 39.99. (Score!)

I used paint markers to do the paintings. I picked them up from Wal-Mart for 1.97 a marker. It gives it a nice clean look, without the mess and work of painting with a paintbrush. When I used real paint brushes on my daughter's mural, it left a smudgy half finished look I didn't love. I ended up fixing her mural with the markers. And then went a little crazy.

I'll do a post of my daughter's room next.

And then I'll be back to book related news.