I can't wait to share with you all what I've been working so hard on.

Today, I get to share with all of you the gorgeousness of my cover. The amazing designer at BoekwegBooks.com designed this for me, and he's just the best. If you, or any of your writing buddies, plan on self publishing, you can contact him at theartist@boekwegbooks.com.

But now, without further babbling... here's my full cover. 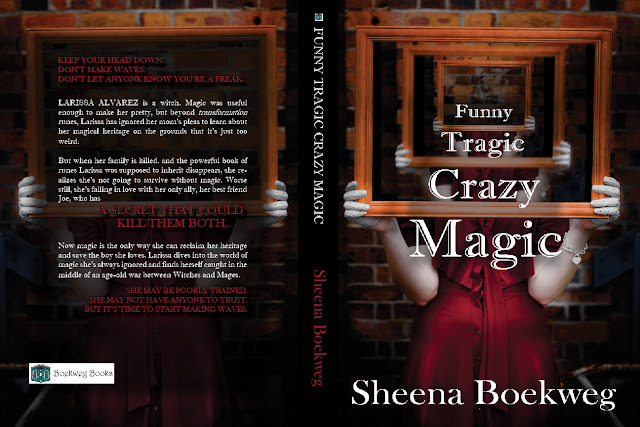 KEEP YOUR HEAD DOWN. DON’T MAKE WAVES. DON’T LET ANYONE KNOW YOU’RE A FREAK.  LARISSA ALVAREZ is a witch. Magic was useful enough to make her pretty, but beyond transformation runes, Larissa has ignored her mom’s pleas to learn about her magical heritage on the grounds that it’s just too weird.   But when her family is killed. and the powerful book of runes Larissa was supposed to inherit disappears, she realizes she’s not going to survive without magic. Worse still, she’s falling in love with her only ally, her best friend Joe, who has A SECRET THAT COULD KILL THEM BOTH.  Now magic is the only way she can reclaim her heritage and save the boy she loves. Larissa dives into the world of magic she’s always ignored and finds herself caught in the middle of an age-old war between Witches and Mages.   SHE MAY BE POORLY TRAINED. SHE MAY NOT HAVE ANYONE TO TRUST.  BUT IT’S TIME TO START MAKING WAVES
Labels: Boekwegbooks cover design cover reveal FTCM