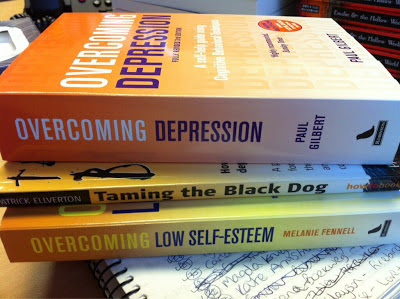 Look whose name is right here ^

Twitter is a way, apparently, of stalking people in a socially approved way.

As many of you know, I'm planning on indie - publishing Funny Tragic Crazy Magic, but what some of you don't know, is that it's also in a pile on an awesome publishing house's short list. I follow (read stalk) the editor on twitter, and today she posted this picture about overcoming her depression.

A shot of Zoloft came for me when I looked at the notebook under her books and saw my name. My name uncrossed between two crossed out names. She's read it, she's liked it enough to not cross it off.

*Also, Melanie Crouse, I see an "se - Love" right there at the bottom, which in my mind has to be Crouse.

Because of this, and also because moving while trying to get book ready is less helpful than you would think, I'm pushing back FTCM launch date.

Funny Tragic Crazy Magic will launch April 1. April Fools Day. That's no joke, although my beta readers will get it.

A quick status report, I've broken FTCM into 5 Acts. Act 1 and 2 are back from the editor, Act 3 and 4 are in her capable hands, and Act 5 is staring at me, daring me to fix it before sending it on to the editor.

And it's good people. You can tell, because look whose name is right up there, uncrossed.

Best of luck to you, Editor-Who-Likes-My-Book.  Depression truly does suck.
~Sheena Boekweg